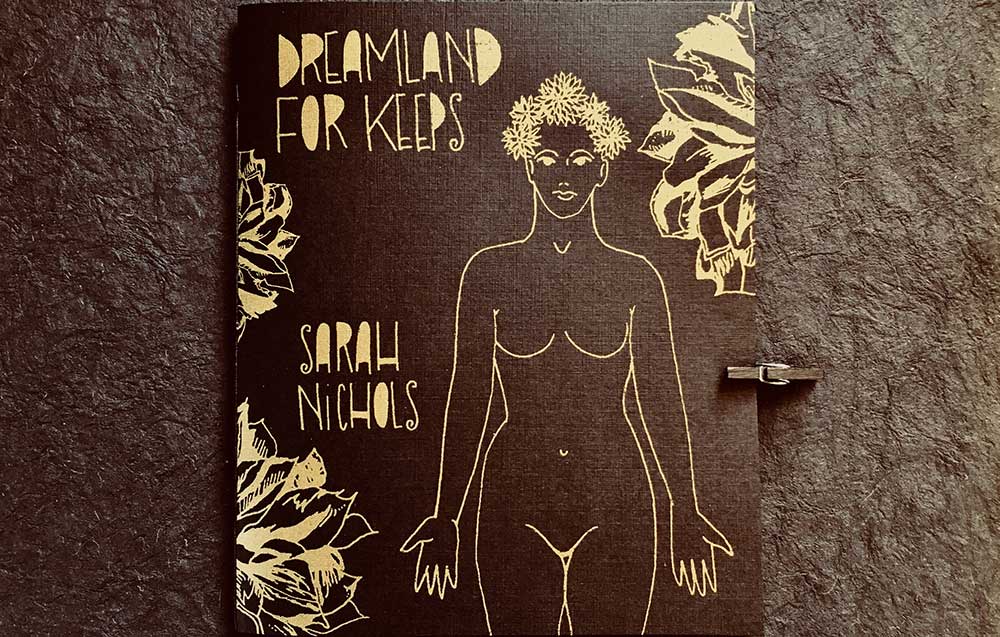 The latest chapbook from poet Sarah Nichols, Dreamland for Keeps (Porkbelly Press, 2018), uses found poetry to reclaim a voice for Elizabeth Short, victim of a brutal murder in 1947. The gruesome details of Short’s death led to sensationalized media coverage and the nickname “The Black Dahlia.”  Nichols lifts words from a novel inspired by the case and remixes them into a pointillist narrative–Elizabeth’s own story, rather than the story told about her. The resulting poems are spare, bold, and utterly riveting. Nicci Mechler of Porkbelly Press enhances the manuscript’s artistry with a beautifully designed, handmade chapbook.

Sarah Nichols took some time to discuss the book, her writing process, and the political implications of her work with me via email.

How did you come to poetry?
I knew that I wanted to be a writer at a young age, but I didn’t see myself as a poet, even when I was discovering Sylvia Plath and Emily Dickinson as a teenager. I loved their work, but it was very intimidating to me. I also thought about being a journalist and a film critic at different points in my life. In 1998, my college held a creative writing contest, and the semester before I had taken a creative writing class that covered fiction, poetry, and memoir. My professor liked my poems, and encouraged me, but I was still doubtful about it. I submitted a poem about Edward Hopper’s painting, Nighthawks, on the last day of the contest. A few weeks later, the winners were posted in the cafeteria, and I had won first prize. I think of that as the beginning. In the twenty years since, there have been starts, silences, doubts, and success. I sometimes feel that poetry chose me, instead of me choosing it.

What attracted you to the story of the Black Dahlia?
James Ellroy’s novel, The Black Dahlia, was published in 1987, and I have a vivid memory of my father reading the hardcover. The cover art is done in blues and blacks and purple and is a stylized portrait of Elizabeth Short. I also remember asking him what it was about, and all he would tell me was that it was very violent. I was in my late teens or earlier twenties when I read the book for myself, and what she suffered sounds almost unreal, but unfortunately, it was. A few years later, I found a copy of Hollywood Babylon, by the avant-garde director Kenneth Anger, which chronicles gossip, crimes, and lurid deaths during the studio era. It also has photographs of the site where Short’s body was found, and post-mortem photos. It’s hard not to be haunted; she was so young, and her circumstances at the time of her death make her seem very lost, and I reacted to that. I still do. I think another thing that I reacted to is the fact that her murder remains an open case, seventy-one years after it happened, and so many theories have been put forth. It’s like a sub-set of true crime.

Can you describe your process by which the book came about?
In July of 2016, I participated in a “31 poems in 31 days” challenge online that asked participants to use genre fiction to make found poems. The first idea was to only use the work of Nicholas Sparks, but other participants asked if other books could be used. I remember talking to another participant about using Ellroy’s novels as a source, and I knew exactly which one I wanted: The Black Dahlia. I started a blog (which I took down when the challenge was over), called Dreamland for Keeps (after a phrase in the novel), and posted a poem there every day of the challenge, along with photographs of Elizabeth Short before her death. I had no real plan for how it took shape. My work also gained more exposure when I reached out to Joan Renner, who writes the Deranged L.A. Crimes blog, and who shared a photo of Short on her birthday, which is at the end of July. I described my project to her, and it definitely drew some of her readers to my work. Again, that was not something that I had planned. It was more “I’m going to comment on the photo she shared and maybe there will be interest.” One poem received over 500 views.

Why found poetry?
I have been writing found poetry almost exclusively since 2013, and I want to say that this challenge asked for found work only, but I may be wrong about that. At any rate, Ellroy’s novel is told in the first person, which made it ideal for persona poems, and the language that he uses is both pulpy and poetic. I wanted to see what I could do with this. I see found poetry as being in a dialogue with the author and the source text; the idea is to transform it, not just remake the existing plot in verse form. That’s the challenge and the joy of it.

How long did it take to find a publisher?
The project was sponsored by ELJ Publications, which has since closed, but at the time, participants were invited to send manuscripts of their work to them after the project was over. In the fall of 2016, I was asked if I would be willing to cut the 31 poem manuscript down to 19, and I did so. ELJ closed in March, 2017. I had not yet signed any contract with them, and other presses opened so that manuscripts that ELJ had taken could find new homes. I sent my manuscript to Porkbelly Press, and they accepted it within an hour of my submitting it. I was stunned. I still am. ELJ told me that they had planned publication for 2018, and that was the same at Porkbelly. I also chose them because Nicci Mechler had a clear vision of what she saw as the cover for my book. In the two years between my writing the poems and publication, I’m still in awe that it’s come to fruition—that it’s a physical thing I can hold in my hand.

This book retells the story of the Black Dahlia, but it uses the silenced voice of the murder victim. One might argue that this is a feminist critique of the events surrounding the case, and of James Ellroy’s subsequent novel. Was this your intent?
Yes, it was my intent. While the novel is told from a first person point of view, it’s still a man’s viewpoint, specifically a member of the LAPD. Elizabeth Short becomes in death the focus of obsession and fantasies, and is described in conflicting ways by those who knew her in life. I think I was also critiquing the role of the femme fatale in film noir, who is seen as calculating, sexual, and deadly to men who come into her orbit; a figure that invites obsession. To name just one example, there’s Laura, from 1944, in which Dana Andrews, a cop, becomes obsessed with Laura, played by Gene Tierney, and who is presumed dead at the beginning of the movie. Her portrait hangs over the fireplace in her home, and the camera returns again and again to it. A more recent example is Twin Peaks (both the original series and the 2017 return) which specifically references the earlier Laura (as well as Vertigo); a young dead woman seen by some as helpful and “good,” but also one who has a terrifying secret life. There are conflicting viewpoints of who Elizabeth Short was, as well, some seeing her as sweet and lost, and others who describe her as someone who lied frequently and was always borrowing money. Ellroy’s novel also has conflicting viewpoints: was she a prostitute? A woman who met the wrong person at the wrong time? Someone who wanted to break into the movie business who never got the chance? She can’t rebut any of these perceptions of her. Harry Hansen, who was the lead detective on Short’s murder, all but said that she deserved what she got:

She didn’t have any standards. She had an obviously low IQ. She was a man-crazy tramp. There were all kinds of men in her life, but only three who had sexual experience with her. She was a tease. She asked for trouble. There wasn’t much to like about her.*

Giving Elizabeth Short her voice back is a way to restore her agency. So many just refer to her as “The Dahlia,” both in Ellroy’s novel and in the literature written about her death, that it can be difficult to remember that this was a woman who had dreams, wanted a life, and definitely did not “ask” for the death that has made her far more famous in death than she was in life.

Would you call yourself a feminist? Why or why not?
I consider myself to be a feminist. One of the reasons why (and this relates directly to my writing) is that women’s stories have to be told, whether it be my own story, or the stories of other women. The stories of women of color continue to be erased or discounted, and white feminism often serves as a gatekeeper, when the gate needs to be torn down. Rape and abuse victims are still not believed or they are vilified for speaking out. 53 percent of white women voted for someone who doesn’t give a damn about anyone but himself for president, rather than vote for a woman. When I was in my twenties, I called myself a feminist, and now, in my forties, I have to do more than just claim that. I’m so grateful that I have friends in the literary community who show me how to be a better feminist, every day.

What does your writing practice look like today?
I don’t know that it has changed very much from what it was when I was writing those poems two years ago. I know that I have written more micro creative non fiction. I continue to look for ways “in” to a project before I get involved in the actual writing. It could be a word, a phrase; an idea that I think I can work with. Right now, I am writing less poetry, because I somehow wrote enough last year so that four chapbooks are being published this year. I am preparing myself to expand one of those chapbooks into a full length collection, and it’s a daunting idea, but not as much as it would have been a few years ago.

Do you have any words of wisdom for new poets trying to find a home for their work?
Read your contemporaries; look at where they publish; ask yourself if your aesthetic is in line with what they are looking for. Consider reading journals that are not dominated by men. Don’t be afraid to ask questions of other writers; this a frequently lonely and discouraging business. Don’t rush trying to put a book out there; things sometimes have to marinate.