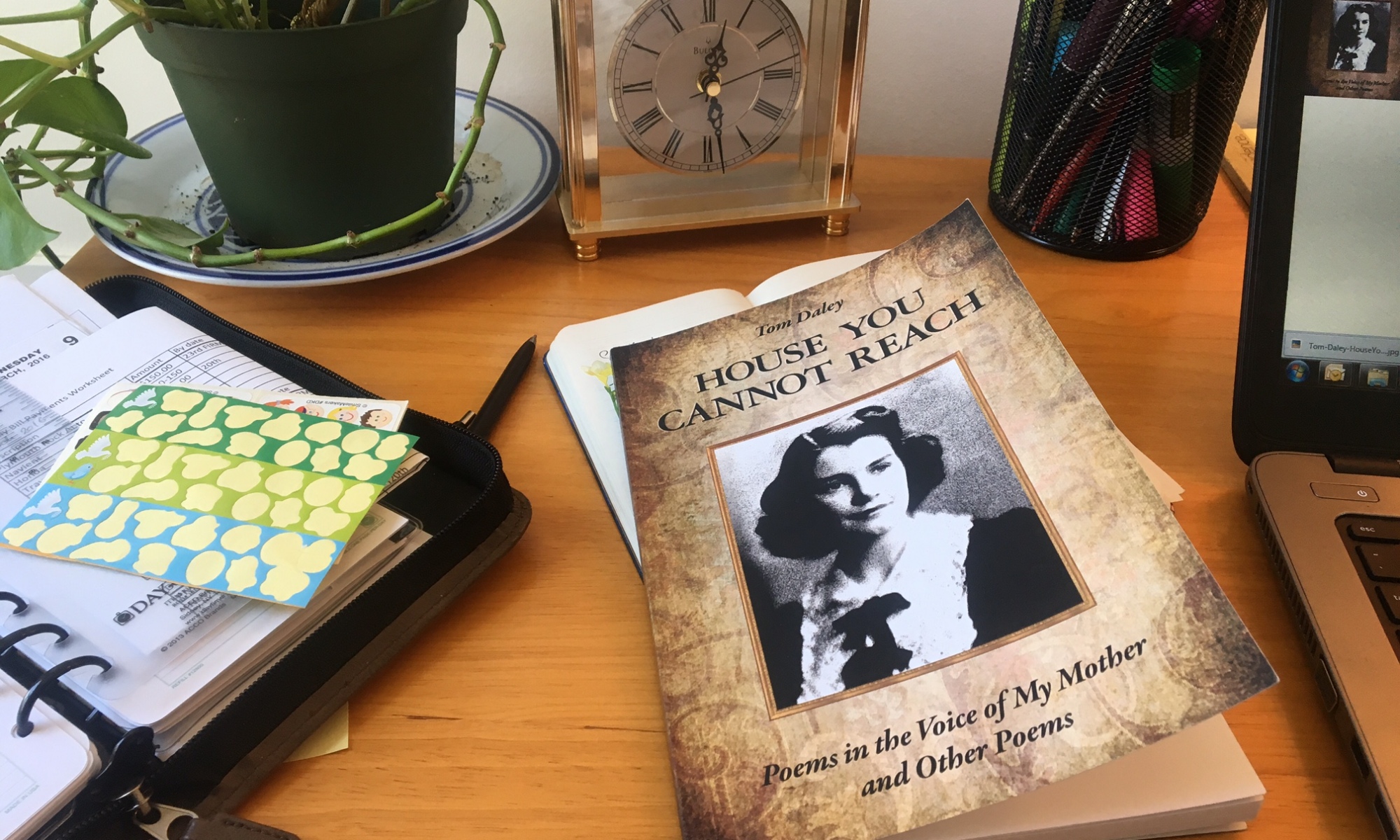 I first met Tom Daley at a reading at the Zeitgeist Gallery in Cambridge, Massachusetts. I’d moved to Boston a few years before, thrilled at the rich, diverse poetry scene and itching to dive in. Unfortunately, I hadn’t factored in the years it would take to acclimate to Boston’s notoriously chilly culture, or the way that living with my girlfriend would stifle my ability to write poetry, which requires a self-knowledge and candor incompatible with my struggles to reconcile our difficult relationship.

A few months after I moved from Brookline to Cambridge, I began dipping my toe in the literary waters. It was then that I discovered Regie Gibson’s reading series at the Zeitgeist and met Nicole Terez Dutton, who was just about to embark on a graduate program at Brown University. Nicole was one of the featured performers — I particularly remember the persona poems about her black ancestors. Tom Daley, a thin, greying man in tweeds, epitomized the sort of intellectual one might expect to find in Concord, the land of Thoreau’s Walden Pond. He read a poem in praise of Nicole, and the warmth and intensity of the piece stayed with me for more than a decade. I recently reconnected with Tom via Facebook and was thrilled to read his new collection House You Cannot Reach: Poems in the Voice of My Mother and Other Poems, published in 2015 by FutureCycle Press. He took the time to answer some questions about his work and his life.

You’ve been an important part of the Boston poetry scene for some time. Can you tell my readers a little more about your involvement in the scene?

I am not really a player in the academic poetry world of Boston and vicinity, but after many years of leading workshops, reading at open mikes, featuring at spoken word venues, and organizing gala poetry performances involving talents such as Regie Gibson, Iyeoka Okoawo, and Nicole Terez Dutton, my name is somewhat familiar to some poetry aficionados in the area. I have also written two plays: Every Broom and Bridget—Emily Dickinson and Her Irish Servants and In His Ecstasy—The Passion of Gerard Manley Hopkins, which I have performed at many venues in eastern Massachusetts, including the annual Massachusetts Poetry Festival.

What first brought you to poetry?

My mother read poems aloud to my siblings and me from very early on, many of them from The Golden Treasury of Poetry (selected and with commentary by Louis Untermeyer and illustrations by Joan Walsh Anglund). Robert Louis Stevenson’s A Child’s Garden of Verses was a favorite book of mine—like Stevenson, I spent a lot of time as a child sick in bed, occupied with reading, being read to, and making up imaginary worlds, as Stevenson relates in “The Land of Counterpane”:

And sometimes sent my ships in fleets
All up and down among the sheets;
Or brought my trees and houses out,
And planted cities all about.

Do you have any mentors you credit for your own success?

There are too many to name, but perhaps my most important and most influential mentors are William Harmon, with whom I studied poetry writing at the University of North Carolina at Chapel Hill, and Daniel Bosch, with whom I studied at Harvard University Extension School. Although I did not emulate Harmon’s sometimes harsh pedagogy or always share his aesthetic, I did learn the importance of developing a fiercely discriminating eye and ear from him. Among many things, Daniel Bosch reinforced and magnified my love of musicality in poetry.  Both were very encouraging to me as a developing poet.

You teach workshops online and in person. Tell me what this experience is like for you and for your own writing.

The leading of workshops is a great joy for me. I am privileged to work with many talented writers who are eager to learn and to improve their work. I am particularly thrilled to watch writers who might not have shown much promise unfold into extraordinary talents under the influence of the reading they are doing and the example of their peers in the workshop.

I once read an essay in The New York Times Book Review by the poet and novelist Jim Harrison, who started his professional writing career while he was a writing teacher. He said he quickly dropped teaching, as it was too much of a distraction from his writing. I, on the other hand, find leading workshops a great enhancement to my own development as a writer. A lot of the issues we confront in the workshop—problems of craft, accessibility, nuance, originality, musicality, and imagination—are issues I must wrestle with in my own poetry. I am constantly learning from writers I work with—from their honesty, their clarity, their inventiveness, and from their struggles to achieve those things. In learning to critique the work of others, I understand, with greater intensity, the shortcomings of my own writing. Being able to articulate how and why some rhetorical device achieves its effect makes it much more likely that I will be able to successfully employ that device in my own creations.

What was the impetus for this collection?

I joined a project led by the poet Nicole Terez Dutton to write thirty poems in thirty days and post them on a private blog. It occurred to me that writing in the voice of my mother, a very compelling character with whom I had a complicated relationship, might be a useful focus for this project. I continued to write poems in her voice as she suffered a stroke and even after she died. Somehow, reaching into my imagination of how she was reacting or had reacted to family tragedies, world events, and her own suffering stimulated quite a few poems.

Did these poems accumulate over many years, or did you write them all in a short period of time?

Tell me about the process of compiling a collection. How do you decide on the order of poems?

I had originally arranged the poems in three sections, two sections of which focused on my mother (either poems in her voice or poems about her) and one which concentrated on other, sometimes related, subjects, such as poems about other members of my family, mostly in my voice. Then I secured the services of April Ossmann, a former editor for Alice James Books, who rearranged the poems by threading the poems in my voice with the poems in my mother’s voice—a much more successful tactic. The order of the book is pretty much as Ossmann designed it.

These poems are in the voice of your mother, perhaps the most important woman in most people’s lives. Do you consider yourself a feminist? Why or why not?

I am an ardent supporter of women’s rights, including the right to free abortion on demand, but I do not consider myself a feminist—I believe the principal division in humanity is between classes and not, as most feminists believe, between sexes.

Where can people find you online? Or in person?

Although I don’t have a website or a blog, I am on Facebook. A lot of my poems and reviews are online, though if you just Google “Tom Daley” you’ll mostly come up with images of a British Olympic diver in a skimpy bathing suit (he’s less than half my age). Add “poem” and you’re more likely to find me. If your readers want to learn more about me and my teaching style, there is an interview with me conducted by Gloria Mindock, publisher of Cervena Barva Press. A more recent interview appears at the Boston Center for Adult Education website where information about my Tuesday evening poetry writing workshop can be found as well.

I teach in-person poetry and memoir writing at Lexington Community Education and classes in poetry as literature at Lexington’s Older, Wiser Lifelong Learners program. I teach an online poetry writing workshop at the Online School of Poetry in January and February. For information about that or my private workshops, contact me at tom.daley2@verizon.net.

I occasionally read on the open mikes at the basement of the Cantab Lounge in Central Square in Cambridge, MA on Wednesday nights, and more infrequently at the Brookline Library Poetry series which meets the third Sunday of each month at the main branch of the Brookline Public Library.

What’s next for you?

Still trying to get House You Cannot Reach—Poems in the Voice of My Mother and Other Poems some attention from readers and critics. Other than that, I have a couple of ideas about a new manuscript of poems and a new idea for a play.

One Reply to “Interview with Poet Tom Daley, Author of House You Cannot Reach”