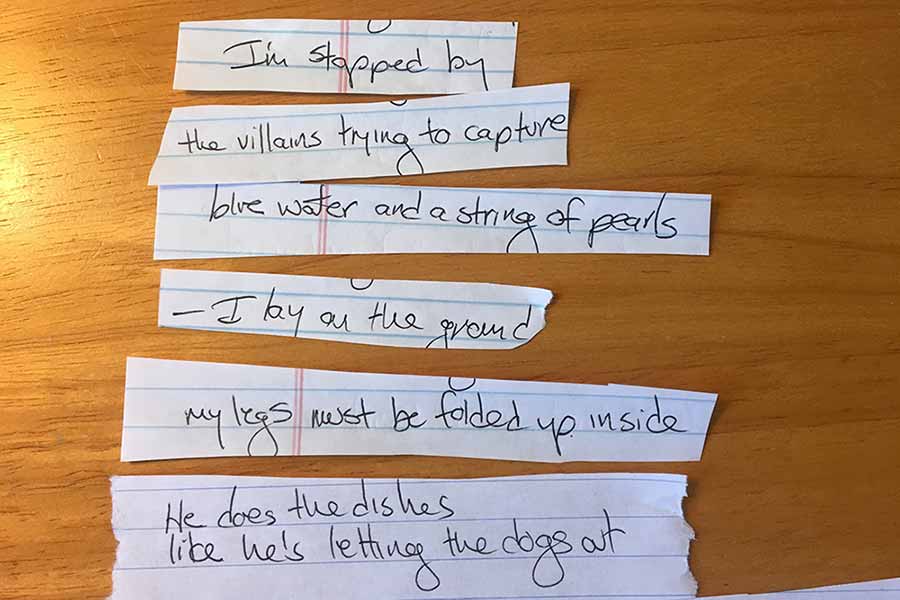 I’m facilitating a workshop using the fun, hands-on technique of literary collage, or cut-ups. You can use this technique to revise your own work or make poems out of existing texts. Scissors, paper, glue, and texts provided.  No experience required! We’ll also discuss how to attribute poems “found” in someone else’s work.

When: Saturday, September 8, 1pm-3pm
Where: SpaceUs at the Roslindale Substation
4228 Washington Street, Roslindale, MA
(Across from Adams Park in Roslindale Square)
Details are also on Facebook

Here’s a video of David Bowie using the cut-up method:

Direct link to the video, in case the embed fails

The first session of the new poetry workshop was even more successful than I’d hoped. Turnout was better than expected: just enough people to fit comfortably in my living room. I start each session with a simple exercise that sets an intention for the evening — that we support one another in the creation of new work. Then we have a grounding exercise followed by a free write. The first free write follows the tradition of Julia Cameron’s morning pages, a sort of throat-clearing, a flushing of the pipes. Achieving that flow state is such an important part of writing, and even more so when it comes to poetry. There’s something about longhand writing that makes this flow state come very naturally. I asked people to pick an object in the room and to use it as a jumping-off point for their writing. When we were finished, we didn’t share the work — we just moved on.

We followed this exercise with a close reading of Julie Ebin’s “Dear Dad,” a poem originally published in Solstice Magazine. In close reading, we go through a poem line by line, word by word, in an effort to see what makes the poem work. I chose Ebin’s poem for its tight wording and surprising turns of phrase — two essential components of good poetry. One of the lovely things about close reading is that other members of the workshop invariably call attention to details I don’t notice myself during my first or second read.

I used a line from Ebin’s poem — “I will try to unlearn dust” — as our second prompt. We wrote for five minutes only, since I find that time limits help me to write without overthinking. At this point I introduced my two basic rules of workshopping new poems:

The results of the prompt were pretty fantastic. I’m always amazed at how many different poems result from the same prompt.

After a short break, I used my box of postcards for our final prompt. Over the years, I’ve amassed quite a collection of interesting images, many of them sent by a pen pal who found my site more than 20 years ago. I pass these around to members and invite them to write something inspired by the image or words on the postcard. Once again, the results were varied and fantastic.

At the end of the workshop I had that wonderful, expansive feeling of endless possibility that follows a creative act with like-minded people. We meet again on Thursday July 9 from 7pm to 9pm. After that are two more sessions: Thursday July 23 and Thursday August 6. Once the group establishes trust in one another, I plan to have people bring in more finished pieces for constructive criticism. And I’ll be sending out information on how to find calls for submission — poetry isn’t meant to molder in a desk somewhere, and it’s easier to go through the submission process with others.

If you’re interested in attending future sessions, you can fill out the form on this page for more details.

The new writing group met last night for the first time. I’ve done my best to appear confident about this new venture, but anyone who knows me well knows the turmoil of the waters beneath the placid surface. Facilitating workshops is not new to me — I’ve done it in various venues and for various years for more than 20 years — but this particular project lies quite close to my heart. Fear of failure and fear of success dogged my steps in the months leading up to its opening.

I feel particularly grateful for the love and support of my two teachers: Toni, who first challenged me to consider the possibility of starting a workshop similar to his, but on the opposite side of the Boston hub. He’s provided support both practical and spiritual — and will no doubt continue to as my own confidence waxes and wanes. And Barbara, whose workshop sparked the necessity of finding a place to generate new stones to polish and polish under her guidance. She said to me, “My first workshop was two friends who were there for free, and one person who paid $40.” That was 30 years ago, and 125 books and countless journal publications have emerged from her workshop since.

This time last week, I was reciting a litany of fears to Toni, and he responded — as he often does — that the universe would give me just what I needed, moment by moment. Last night, that was a small group which merged effortlessly. And a group decision to focus on generating works of poetry, the form I am concentrating on myself.  In three hours we worked four different prompts, and by the end of the evening we felt expansive and full of possibilities.

We meet again in two weeks, when two more new members will join us. We have space for a few more, but whether the group stays small or expands to capacity, I’m sure the universe will provide just what is needed.

Two years ago I read a piece in the Sun Magazine by a woman named Brenda Miller called The Burden of Bearing Fruit. It was the sort of article one finds there a great deal: a personal essay, contemplative, sometimes rambling, with a flash of beauty  — a surprise tie-up, an effortless making-sense of daily objects and events. The making-sense of art, which tells the true but tells it slant.

These essays often shame me in their seeming effortlessness in the same way that Martha Stewart shames wives and mothers all across America, or the way Oksana Baiul shames 12-year-old figure skaters. In my saner moments I remember that the authors of these essays (often English professors or professional writers) probably went through multiple drafts, worked and worked on each word and sentence, considered the form and flow of the piece, perhaps the thesis and the theme. In my less sane moments I wonder why my own work doesn’t appear in The Sun’s pages. Never mind that I’m focusing on honing my craft in poetry right now, not personal essays. Or that I have a full-time job writing meeting minutes and functional specifications. Why am I not better at it by now? Where is my Harvest-themed centerpiece? Where is my triple lutz?

But let me, for the sake of this moment, put aside those inner critics. Let me even put aside the notion that I might beat that little hater. And let me return to that phrase which has stayed with me for two years and more: the burden of bearing fruit. Miller describes her own complicated relationship to the cherry tree that graces her property. You’ll have to read the essay to catalog its full meaning, but what stays with me is the notion that as the tree ages it is released from the burden of bearing fruit. Approaching 40, years into an artistic recovery I can barely discuss without weeping, I’m well aware of this burden. The terrible secret of farming and gardening is that bringing in the harvest is just as difficult as the plowing, the sowing, the planting, and the tending. Once the fruit arrives it must be picked, it must be eaten, it must be shared, it must be preserved and set away for the winter.  Some of it always rots.

My tree has blossomed and begun to bear fruit. This evening I read at the Newton Free Library and the day after a brand new workshop begins meeting in my home.  It’s not the first time I’ve read to an audience, not the first time I’ve led a workshop, but the burden of bearing fruit remains. Perhaps this time the harvest will be more sustainable.

About six months ago I joined a writing workshop. I’m still not sure whether it was a good decision or a bad decision. One the one hand, there’s the whole “make me a better writer” argument. On the other hand, I find myself cringing from imagined criticism before I write a single word.

I’ve written and rewritten this third paragraph three times now, not sure exactly how to say what it is I want to say. Did Emily Dickinson agonize over her verse like this? Do I really want to be Emily Dickinson? Her life kind of sucked.

I leave the workshops variously energized, exhausted, and frustrated. For a while I was sure I wasn’t coming back. But then I was accepted for publication somewhere, and asked to read somewhere. I felt like I’d broken through some kind of barrier, one composed mainly of my own hang-ups.

The workshop leader herself is expansive, creative, extravagant. She has lived the kind of life I thought I wanted to live: professorships at this university and that university; poet in the schools; workshops in France, in Maine, in Taos NM. She has written books of beautiful poetry. I want very badly what she has, but I’m not sure what that is.

After the first class, she said, “Wonderful! You are a wonderful poet, a wonderful critic!” At the beginning of the new term, she said “Welcome home,” and gave me a hug.

And then proceeded to rip into my poem when it came around the table. Is it just me? Am I being too much of a sensitive poet? Finding a reason not to walk the road I’d fantasized about for so long? Even after reality-checking with a friend, who agreed that she does seem harsher toward me than the other students, I don’t know. Can’t articulate it. Can barely articulate it in this post. Have no idea how to ask for things to be different — or if it’s even possible.